The Angel of the Lord: A List of Verses 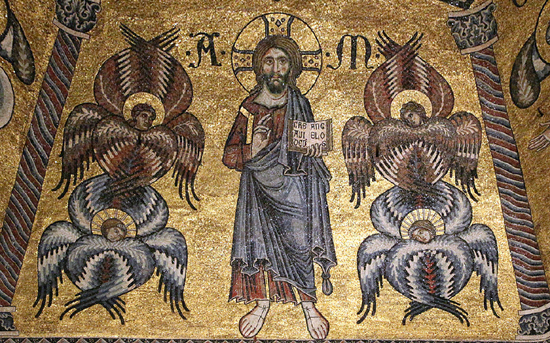 One of the most important contributions of the early Jewish-Christian community to our understanding of Jesus is the connection they made between Jesus and the Angel (or Messenger) of the Lord.*  This mysterious being appears in several places in the Hebrew Bible.  He has the appearance of a man, yet speaks and acts like God.  This identification was an important early step in the development of the idea of the Trinity:  that the Angel of the Lord, the pre-incarnate Word of God, is God himself, yet is distinct from the Father.

* The Bible’s words for “angel” (malach in Hebrew and angelos in Greek) mean simply messenger.  Whether this refers to a human messenger, a spirit-being messenger (an angel), or God himself acting as a messenger must be determined from the context.

One of the most well-known appearances of this Messenger of the Lord is as one of the three men who appeared to Abraham at Mamre (Gen. 18:13,17,20).  In the passage, one of these visitors is identified as the LORD God himself: “and the LORD said to Abraham” (Gen. 18:13).  Later, this same LORD rained fire and brimstone on Sodom “from the LORD out of heaven” (Gen. 19:24).  This is a clear reference to two distinct entities—the Father in heaven and the Son on earth—that share the divine name (LORD, YHWH in Hebrew) and are together one God.*

* Evidence for this understanding among the early Jewish-Christians can be seen in their controversies with the rabbis in which they used passages like these to argue for the divinity of Jesus (Sanh. 38b).

Here’s a list of the other appearances of the Messenger of the Lord where he is specifically referred to as God or the LORD:

Later, under the influence of Greek philosophy, the idea of Jesus as the angelic messenger of the Lord was misused.  Some began to teach that Jesus was “just” an angel, that is, that he was a type of created spiritual being, and was therefore not God.  This view became very popular in the Arian heresy of the 4th century, and lives on today in the Jehovah’s Witnesses. In response, the Church cooled to the idea of Jesus as the Angel (Messenger) of the Lord, and the teaching was actually denied by Augustine of Hippo (5th century).  But it remains an important Biblical teaching when understood in the original sense that Jesus, the messenger of God, is in fact God revealed to us, yet at the same time is distinct from the Father God.

(For more on this topic, see our teaching Does God Have Parts? or the index category the Angel of the Lord.)