Q:  [In response to our teaching, “The Washing of Water with the Word”:]  I'm going to get into trouble here, but here goes anyway....please notice that the verse you mention says that the Messiah does the cleansing by the washing of water with the word.  We don't do it.  Therefore it is a gift, just like our name from our parents.  So there is no need for someone to wait until they are "ready" for baptism.  It is a gift that we cannot by our own power or will do anything to be "ready" to receive.  Moral of my story is --get your kids baptized and don't wait another day.  –Stephanie K.

A:  Thanks for your enthusiasm in defending infant baptism--a long-held and widely practiced tradition of the Church.  But this tradition ignores a key component of the original idea of baptism:  that receiving the word of God—being “cleansed...by his word” (Eph. 5:26)—requires being able to understand that word.  Traditional churches themselves admit to the inadequacy of infant baptism by their practice of confirmation, a rite mentioned nowhere in the Bible.  Having teenagers confirm or accept their baptisms is a recognition that infant baptism is incomplete without the conscious and believing participation of the one being baptized.  And that's exactly the point.  Baptism is the outward, public response to an inner faith:  the sign of a conscious repentance of sin and a decision to follow Jesus.  This decision brings an inner cleansing (Acts 15:9), while baptism completes the process with an outer washing:  “the outward sign of an inward grace,” as Augustine of Hippo put it.  There is just no other way to make sense of the Biblical description of this rite as a "baptism of repentance for the forgiveness of sins," unless there is an actual repentance on the part of the person being baptized ( 1:4, Luke 3:3, Acts 13:24, 19:4).  This requires a conscious appeal to God (1 Pet. ) by faith (Col. 2:12).  Infants are completely incapable of doing these things.

Read more »
Posted by Jeff Harrison at 10:52 PM No comments:

The Meaning of Psalm 23 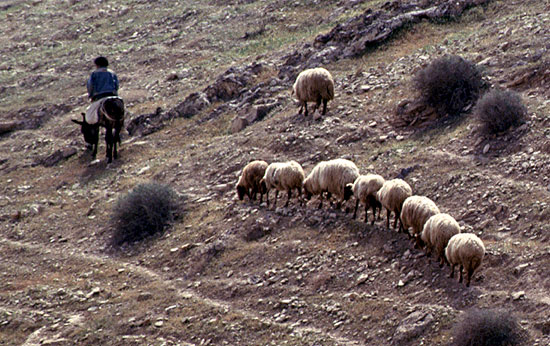 The original historical context of Psalm 23 is the ancient Kingdom of Israel, in which sheep were a major part of the economy.  We’re talking about huge flocks of sheep running into the thousands in some cases.  King David, probably the most famous king of Israel, worked as a shepherd when he was a boy, just as many other boys did at the time.  This Psalm, which is associated with his name, likely reflects his own experience as a shepherd as he reflects on God as the shepherd of his own life.

The sheep-grazing areas in Israel are mostly dry, rocky, semi-desert areas, where the sheep are often taken far away from the agricultural land near town, especially in the spring and summer.  This is an area of steep and dangerous cliffs and canyons.  Even a sure-footed sheep or goat is in real danger of falling to its death. In fact, I’ve seen a couple of them nearly fall myself out in this area.

Read more »
Posted by Jeff Harrison at 1:23 AM No comments: