If the Philistines were Greeks, why did they worship Dagon? (Q&A)

Q:  In my devotions the other day I was reading about when the Philistines captured the ark, and how God showed the Philistines that he was greater than Dagon…  If the Philistines were Greeks, why don’t we see them worshipping any of the Greek gods – only Dagon? --Sarah P.

A:  You’re right that the Philistines have now been identified as Greeks of some kind—or at least that they developed from an original core of Greeks that settled in what is today Israel and intermarried with the local population.  This is the result of both DNA analysis, pottery analysis, and the similarity of cultural practices that point to a connection with Greece and/or other areas of Greek influence (such as Cyprus, Crete, and western Turkey).  These include the bronze greaves worn by Goliath, the Philistine hero that was overcome by David (1 Sam. 17:6), and even Goliath’s call to one-on-one combat (representative warfare), otherwise unknown in the area.  However, the connection of the Philistines is with a very early time in Greek history known as the Mycenaean Age (15th-11th cent. BC).  This was long before the Classical Age of Greece (5th-4th cent. BC) with its well-known Greek gods (the Olympian gods).  It was even before the Archaic Period (8th-6th cent. BC) in which Greek writing first appears and we first hear of these new gods.  (See diagram) 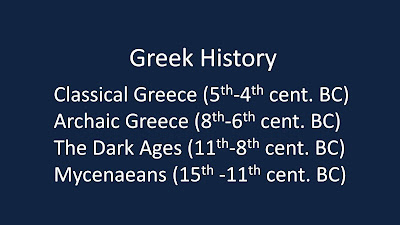 But this was not only a matter of the passage of time:  The Archaic Period was separated from the earlier Mycenaean Age by the Greek Dark Ages (11th-8th cent. BC), during which literacy was completely lost and even the Mycenaean script forgotten.  The great Mycenaean palaces and cities were destroyed or abandoned.  There was a huge decrease in population.  This was clearly a time of great trauma for the Mycenaean civilization, great enough to bring that civilization to a close.  What exactly happened is debated, since (as a “Dark Age”) we don’t have much information about it.  Was it famine?  Invasion?  Earthquakes?  But whatever happened seems to have affected the whole of the Eastern Mediterranean:  all the way from the Hittites in the north to the Egyptians in the south.  And it involved, either as a cause or as a result of all these changes, a mysterious group known as the “Sea Peoples.”

The Sea Peoples were loosely-organized groups of invaders from the general area of Greece and even further afield (including Sardinia) that came to the Eastern Mediterranean and overthrew cities and even kingdoms.  They even tried to overthrow Egypt, but narrowly failed.  The Philistines were one of these groups, also known as the Peleset.  When they failed to settle in Egypt, they chose instead the southern coast of what is today Israel.

One of the key historical events that took place near the close of the Mycenaean Age, and which may have contributed to the Sea Peoples invasions, was the Trojan War (13th-12th cent. BC).  It wasn’t only Odysseus that went wandering around after the close of the war (as recounted in the Odyssey).  Others, too, scattered around the Mediterranean, as recounted in the Nostoi legends.  Some of these wanderers settled in the Eastern Mediterranean.  These are most likely to be identified with the Philistines and other similar groups that settled along the Eastern Mediterranean coast at this time.

It’s true that when we read the Iliad or the Odyssey, which tell of the Trojan War, the classical Greek gods are an important part of the story.  But Homer, who lived in the 8th cent. BC, wrote this account hundreds of years after the events portrayed, long after the collapse of Mycenaean civilization.  The Greek historian Herodotus (5th cent. BC) says that Homer was one of the first to name the Greek gods and describe their characters.  This means that the gods that appear in his account are a later addition to the original legends about the war, and tell us more about the groups that came together to form Classical Greek civilization, and little about the beliefs of the people at the time of those events.

In the same way that the core Greek group of the Philistines intermarried with local Canaanites, they also adopted their local beliefs.  One of these was the worship of the god Dagon, which is documented in the area back to as much as a thousand years before the arrival of the Philistines.  It seems to have been a common belief in ancient times that different gods ruled over different regions, and people would adapt to whatever region they happened to live in.  A good example of this in the Bible is the Samaritans, who began to worship the God of Israel because they had come into his territory (2 Kings 17:25-28).

(For more on this topic, see our Great Discoveries of the Bible Seminar.)