Q:  I have read your message, "When did the 'Tav' mark start to look like a cross"?  I`d be very thankful, if you can answer some questions.

You say that the Essenes marked Messianic prophecies in their Bible scrolls with a cross mark. Can you give me some example of that, how they use the cross? Is there no doubt that the crosses were placed there with some definitive purpose and not only to mark the messianic passages out of the others?

I`ve read some article about ossuaries with crosses, found on the Mount of Olives. Yet many modern scholars say, that these crosses are only mason marks or marks, showing how to close the lid and the cross did not come into use as a Christian symbol until the early part of the 4th century. Also Amos Klosner says that. I`m very confused about that. I don`t know, but I think that only ossuaries with inner ledges on the sides and sliding lids need a mark, showing how to position the lid and that there should then also be a mark on the lid on the same side opposite the crossmark and inscription. Is there any evidence that the crossmarks could be only such marks or masons’ marks? Can you also tell me how I can get the exact description of the ossuaries with crosses found by Charles Clermont-Ganneau, Bagatti, and Sukenik?

In 1980 there was a family tomb discovered in East Talpiot in Jerusalem with 9 ossuaries. Six of them were inscribed with the names Joseph, Mary, Jesus son of son of Jesus, Matthew, and Mary. There was also a cross mark on the ossuary with Jesus son of Joseph. What could this cross mark mean?

Can you take some time to answer my questions? Thanks in advance.  --Maritta

A:  In Ezekiel 9:4, the word often translated "mark" is tav in the original Hebrew language.  The word tav is also the name of the final letter of the Hebrew alphabet, which at the time was made in the shape of a cross, or sometimes tilted over like an "x." (This is different than the way tavs are made today.)

In certain Essene Biblical scrolls, a tav mark appears in the margin beside verses that apply to the Messiah (see cross #1 below).  The purpose seems to have been to indicate which verses concern the Messiah, just as some modern translations have stars or other symbols or colored marks beside Messianic verses.

I, too, am not convinced by the usual scholarly interpretation of the cross marks found on ossuaries on the and elsewhere in  from the 1st cent. AD (see crosses #2-4).*  Some are quite large, much larger than would be necessary for a mason's mark.  I believe that most of these are either Jewish Christian symbols indicating Messianic beliefs, or perhaps Jewish symbols pointing to the end-times, just like the crosses on the Essene scrolls. 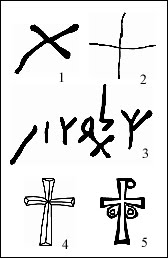 The use of the tav symbol by the Essenes to refer to the Messiah means that this symbol was being used within Jewish society at the time of Jesus with a meaning very close to that which it later had in Christianity.  That this symbol was picked up early by Christians is indicated by the great diversity of cross-shaped symbols in Jewish-Christian contexts that have been found in the archeological excavations at Nazareth, Capernaum, and elsewhere.

One of the few accessible books that contains a description and photos of these ossuaries is Jack Finegan's The Archeology of the New Testament.  He also has an excellent discussion of the evidence for the cross as a Christian symbol.

(For more on this topic, see the Index category Cross, sign of the.)