Is global warming really happening?  Global warming “advocates” claim that rising temperatures endanger the earth and our lives.  Warming “deniers” claim there is no global warming at all.  Who’s right?  Is there any way to know what’s really going on with the climate?  Most of the evidence you hear in the media comes from meteorological data (weather records).  But there are only about 150 years of reliable meteorological data to work with.  That’s a pretty small database to forecast what will happen in the future, or even to understand what’s going on right now.  Is there any way to get a longer-term view of the problem?  Yes, there is.  Just ask a geologist.

Geologists also maintain records of earth’s surface temperature, but over a much longer period of time.  The graph above shows the earth’s surface temperature going back millions of years (from an evolutionary point of view—for a creationist perspective, continue reading below).  Everything above the “0” line was warmer than it is now, everything below the line is colder than it is now.*

* This graph is taken from the “Geologic Temperature Record” page on Wikipedia (http://en.wikipedia.org/wiki/Geologic_temperature_record).  It appears in the “Overall View” section near the end of the article.  Posted with a Creative Commons License that permits its use here.

This graph (above) focuses on the recent past by expanding the space given to it (the last five million years take up more than half of the graph) and compressing the much longer preceding ages to the left (see the time scale at the bottom of the graph).  Below is a graph that uses the same data, but has been redrawn to give equal space to equal periods of time.  This gives a more accurate overview of the record of earth’s temperature over time.

Right away you can see that the earth has been much warmer than it is now over almost all of its history.  The geologic evidence for this “normal” temperature includes fossils of pine trees in Greenland in the north as well as Antarctica in the south, together with ferns and broad-leaved trees.  Unlike today’s bitter cold, these areas once enjoyed subtropical weather.  Redwood trees grew in Antarctica, fruit trees flourished on islands in the Arctic.  There were tropical ferns in Canada, palm trees in Alaska, as well as all kinds of animals, including dinosaurs.  The water near the poles used to be warm enough to swim in.  These warmer temperatures continued until as recently as 5 million years ago or so. 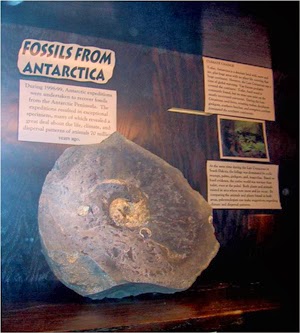 If we jump now to the much more recent past, from a geologic point of view, we are still coming out of a recent ice age (or ice ages--the little blue blip on the right of the graph above), and so are still quite a bit colder than the earth “normally” is.  The evidence for this recent warming trend includes the retreat of glaciers around the world (for as long as records have been kept, about 150 years) and the abundant evidence of rising sea levels (see graph below from Wikipedia, Creative Commons License).  As every archeologist knows, many important archeological sites once on shore are now underwater.*  Islands once connected to the mainland are now separated by seawater. 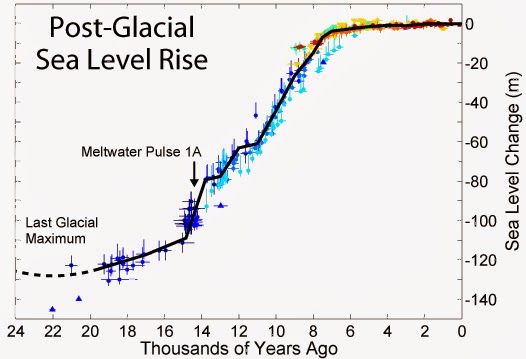 * Recent fascinating discoveries include a previously inhabited area off of India’s west coast (now under the Gulf of Cambay) and a large area now beneath the North Sea between Britain and the Shetland Islands (http://news.bbc.co.uk/2/hi/6584011.stm).

What all of this means is that, yes, global warming is happening.  But it’s nothing new.  And it’s nothing to worry about, either.  The warming we’re experiencing right now has been going on for thousands of years—since the last ice age.  But in spite of the warming trend we’re in right now, we’re still far below earth’s normal temperature range.  So unless you own some ocean-front property, relax.  None of us is in any immediate danger.  The earth’s temperature can increase quite a bit and life will go on pretty much as it always has.

By the way, carbon dioxide levels today are quite low compared to earth’s geologic “normal.”  In ages past, high carbon dioxide levels permitted more abundant growth of plants and trees.  So if carbon dioxide levels are going up, it’s nothing to be worried about.  There are plenty of other chemicals being poured into our environment that present a much greater danger.  Maybe we should focus our attention on them rather than on the gas that naturally comes out of our mouths when we breathe.

From a creationist point of view, the message is the same, though the data are interpreted quite differently.  The time frame of earth’s history is in the range of thousands rather than millions of years.  The so-called geological ages represent not long ages of time, but a single watery disaster, the Flood of Noah mentioned in the Bible and in the legends of hundreds of different people groups around the world. This means that the temperature data from these earlier “ages” represents not long periods of time, but rather regional variations from the time immediately prior to and during the Flood year.  (See graph below.*)

What this data tells us is that the earth’s temperature before the Flood was considerably higher than it is today.  Mild temperatures extended all the way to the poles, vegetation covered areas where it can no longer be found today (see the description of a warmer earth above).  This was earth’s “normal” temperature range before the catastrophe of the Flood.

When the Flood event began, hot waters from deep beneath the earth erupted into the atmosphere and then fell back into the sea (the “fountains of the great deep” mentioned in Gen. 7:11 and in other cultures’ memories of the Flood), raising the temperature of the sea water.  Meanwhile, the resulting volcanic eruptions sent volcanic dust high into the atmosphere.*  This reduced the amount of sunlight reaching the earth and cooled off the land areas.  The warm seas increased the amount of evaporation, which then began to fall as snow over the cool continents.  For many years, cooler summers didn’t get warm enough to melt the snow, and so the ice age began.

* There is extensive evidence of high levels of volcanic dust in ice age ice cores from Greenland and Antarctica.  For a more in-depth discussion of the creationist view of the ice age and its connection to the Flood, see http://www.answersingenesis.org/articles/nab/where-does-ice-age-fit

Since then, as things settled down again, the earth has slowly been returning to its previous normal.  But we still have a long way to go.

What all this means is that, yes, global warming is happening.  But it’s nothing bad or dangerous (unless you live near the beach).  It’s simply the earth slowly returning to what it was like before the Flood.