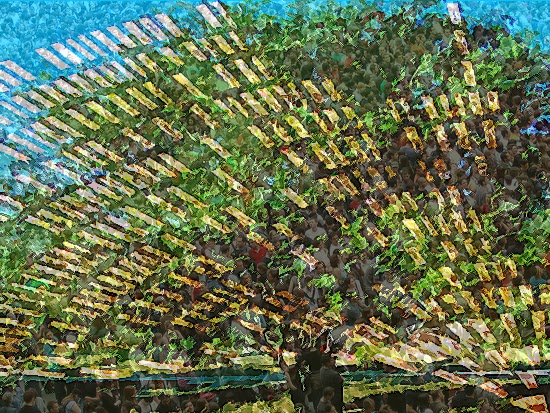 There are many beautiful expressions in the Bible that slip by translators for one reason or another.  One of these is the phrase “a generation of generations” (dor dorim).  Most translate it “through all generations” or something similar.  This does capture the idea in a general sort of way.  But as Jesus taught, in God’s Word even the smallest letter and stroke of the pen is important (Matt. 5:18).  In fact, this simple expression captures an amazingly beautiful insight into the resurrection:  that the final generation of mankind will be a single generation made up of many generations.

There are only three places that “a generation of generations” appears in the Bible.  One is in Psalm 72, a remarkable Messianic psalm that speaks of a king greater than any of the Old Testament kings of Israel.  This king will rule “to the ends of the earth” (Psa. 72:8), “all nations will serve him” (Psa. 72:11), and “all nations will call him blessed” (Psa. 72:17).  This is clearly the Messiah.

The future age in which he will reign is described in remarkable prophetic detail.  Psa. 72:6 says that “he will descend like rain on the shearing [of sheep in the spring*]; as abundant showers that drip on the earth.”  From a poetic point of view, this describes his reign as a beautiful time of refreshing.  But as prophecy, it points to the return of the Messiah, who will descend from heaven with all his holy ones at the beginning of the Millennium (Zech. 14:5, Acts 1:11, 1 Thess. 4:16).

* The Hebrew word for “shearing” here can also be translated “mowing” (of grass), both of which point to the springtime, the rainy season in Israel.

The next verse says “The righteous will sprout in his days, and an abundance of peace until the moon is no more” (Psa. 72:7, see also 72:17 “while the sun endures”).  Messiah will reign until the moon (and the sun) are no more.  This is also the teaching of Revelation, that the Messianic kingdom will last until the sun and moon, and even the earth itself, are removed by the power of God (Rev. 21:1).  This same idea is repeated in Psa. 72:5, “They will fear you with (the presence of) the sun and before the moon, a generation of generations.”  The Messianic kingdom will remain as long as the sun and the moon endure.

* That none of the unrighteous will be included in the final generation was clearly taught by Jesus himself.  In Luke 20, he described the final generation as “those considered worthy to attain to that age and to the resurrection from the dead…” (Luke 20:35).  This is also the implication of his teaching that at the coming of the Son of Man, all who are not caught up in the resurrection of the righteous will be destroyed, as in the days of Noah and Lot, when the judgment of God “destroyed them all” (Luke 17:27, 29,30).  For more on this topic, see our book on “The Revelation of Jesus Christ to John.”

This is not the only place this idea appears in the Bible.  Isaiah 51 also speaks about God’s coming judgment and destruction of the heavens and the earth:  “Lift up your eyes to the heavens, and look at the earth below; for the heavens will be dispersed like smoke, and the earth as a worn-out garment” (Isa. 51:6).  The focus here, too, is on the coming of the Messiah, the Arm of the Lord:  “For me the coastlands will wait, and for my arm they will wait in hope” (Isa. 51:5b).  When Messiah comes, the wicked will be destroyed, “for a moth will eat them like a garment, and a worm will eat them like wool” (Isa. 51:8a).  But those “who know righteousness, a people that have my Law (Torah) in their heart” need not be afraid (Isa. 51:7a).   Who are these that have God’s Torah (his Law, teaching) in their hearts?  This is the new covenant of Jeremiah 31:31-34 (Heb. 8:7-13), the Law of Messiah, given not just to Israel, but also to the Gentiles (the nations):  “Pay attention to me, my people; and listen to me, my nation, for a Law (Torah) will go out from me, and I will cause my justice to rest as a light for the peoples” (Isa. 51:4).

The third time this expression appears is in Psa. 102, which also speaks of the coming destruction of the heavens and the earth:  “Formerly you established the earth; the heavens, too, are a work of your hands.  They will perish and you will remain; and as a garment they will all wear out, as clothing you will change them, and they will be changed” (Psa. 102:25-27).  The book of Hebrews tells us that these verses refer specifically to the Son of God (“But to the Son he says:” Heb. 1:8a, 10-12).  But much else in this Psalm also refers to the Messiah.  Verse 13 prophesies his resurrection:  “You will arise, you will have compassion on Zion; for the time to show her favor, the appointed time, has come” (Psa. 102:13).  This compassion will extend to the Gentiles: “And the Gentiles (the nations) will fear the name of the LORD; and all the kings of the earth your glory” (Psa. 102:15).

But the time will soon come when he will return in glory:  “For the LORD will build up Zion; he will appear in his glory” (Psa. 102:16).  That this is talking about an event in the future is made clear in vs. 18:  “Let this be written for the last generation*; and a people yet to be created will praise the LORD” (Psa. 102:18).  When will his return take place?  “At the gathering of the peoples together and the kingdoms to serve the LORD” (Psa. 102:22).  This is the final ingathering of the righteous that will take place at Jesus’ return (Matt. 24:31).

* “Last generation” is also how the Septuagint (LXX) translates the phrase dor acharon, though the more common translation “the generation to come” also indicates one special generation in the future.

(For more on this topic, see the index categories Prophecy and Millennium.)